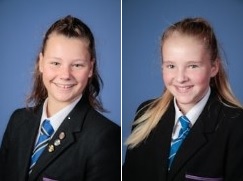 There were 90 entrants in a variety of five sailing dinghies all competing individually but also as a representative of their School and Club.

“I am delighted to be able to say that Emily and Annika put in a sterling effort in the Topper 5.3 class.

Emily and Annika’s success in the event, along with the other competing Ballyholme Yacht Club Cadets resulted in the Club winning the RYANI Trophy this year.

This was an excellent performance by all concerned and worthy of recognition.