You are here: Home / FRIENDS OF GLENLOLA

Old Girls’ Association has been renamed Friends of Glenlola Collegiate so that both former staff and former pupils may be included.

If you are interested in joining, please email Maxine Porter at mporter706@glenlolacollegiate.net .

Miss Sarah Isabel Mogey was a graduate from Queens University in Belfast and took up a career in teaching. In 1933(?) she bought a brand new Austin 10/4 saloon which was given the name “Neddie”. She taught in Belfast and then moved to Bangor where she spent many years teaching at Bangor Collegiate school.  She used the car virtually every day until she retired.  Thereafter it was put away in her garage under a large sheet of polythene.   She purchased a Mini and continued driving until her 90’s.

It is quite obvious Miss Mogey loved the car as she would send it a birthday card each year and some of these cards survive.  I loved the story that she was a diminutive figure and often sat on her pupil’s exercise books to enable her to see over the steering wheel. Then there was the time when it had been snowing and “Neddie” was driven to school as usual. However, Miss Mogey told the Principal that she would have to go back home as “Neddie” was not very good in the snow. Having driven “Neddie” back home, she then walked through the thick snow back to school to continue her teaching. 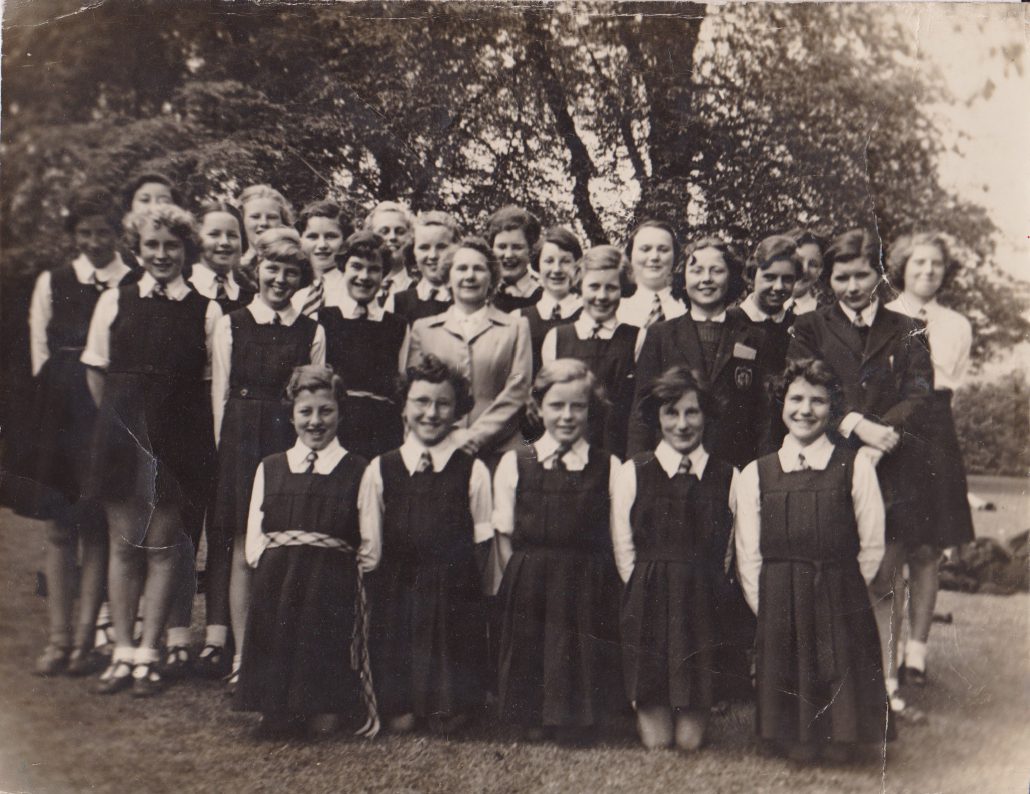 There is a letter on file with her will which hoped that any new owner would “…use their best endeavours to restore the car to its previous condition”. That on restoration of the car “…you will fit a plate, preferably on the dash board with the words “Neddie” previously owned by Miss Isobel Mogey BA, Bangor Collegiate School.” I do wish I had known this lady.  “Neddie” has now been acquired by Al Rhodich from North Coast Auctions who intends to look after her correctly.

If you have memories of Miss Mogey or Neddie please email them to mporter706@glenlolacollegiate.net

“Jillian remembers Miss Mogey and remembers 6th former leavers in 1964 had a thought it would be a good idea to hoist Neddie up the school flag pole. Thanks for your email with the story attached…. it made good reading and amusing reading too and we enjoyed it.”

“I have very vivid memories of Miss Mogey and Neddie. I left the School in 1963. Miss Mogey was certainly a little lady and had to sit on a pile of books to see over the steering wheel. One day the books fell over as she was driving down Main Street. I can’t remember the outcome but I’m sure someone else will.  A lovely story I remember is that Miss Mogey once offered a girl a lift home at lunchtime. The girl thanked her but refused, saying that she was in a hurry!”

“She had to have 3 cushions in order to see over the steering wheel!!!”

“Miss Mogey was a lovely gentle person .
She represented much of what was so good about Glenlola Collegiate. I recall being fascinated by Neddie as most girls were .

I recall receiving a rather good mark for my Scripture examination. My dearest friend Doris was a little put out because I had not attended any classes!!!

So proud to have been a pupil at Glenlola Collegiate . Teachers were very good role models for their pupils.

Made friends who still occupy a special place in my heart : Doris Willoughby ,Joanne Wilkinson and so many more.”

‘I have very fond memories of both Miss Mogey and Neddie.

I hadn’t heard some of the stories that you attached but I did hear that someone suggested that she trade the car in. She replied that she couldn’t possibly hurt Neddie’s feelings.

Just after I left school I heard a rumour that Miss Mogey had got engaged. She was at great pains to have the rumour scotched immediately, but someone may have had the idea because at the same time Miss Kennedy, one of the history teachers, also called Isobel, really had got engaged. My friends who told me about this said that she was all dithery and starry-eyed, which was a side of her that we weren’t accustomed to!’